The Bilingual Revolution: The Future of Education is in Two Languages 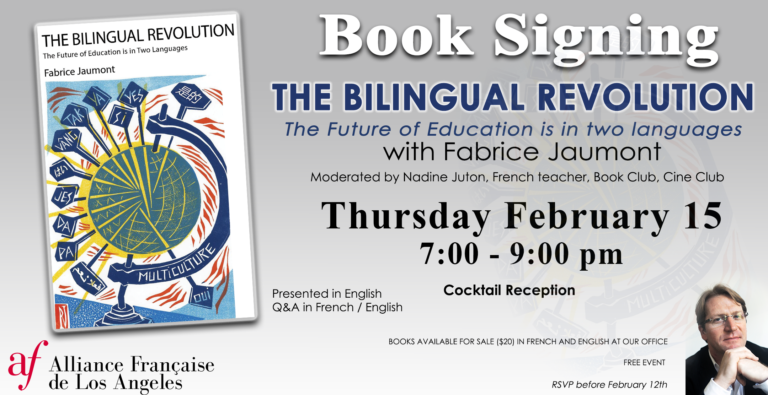 The Bilingual Revolution: The Future of Education is in Two Languages tells the story of a grassroots movement that emerged out of the dedicated involvement of motivated parents, educators, and community actors willing to create and support dual language programs in public schools.
Combining insight on learning and living in two languages, the book shares practical applications and examples of bilingual education, from preschool to high school. With New York City as a backdrop, Fabrice Jaumont, from a personal and scholarly perspective, recognizes in his book the successes and setbacks of these programs through vignettes that feature the parents and educators he helped initiate bilingual programs in their schools.

On Thursday February 15th, Fabrice Jaumont will give a talk about the Future of Education in Two Languages and sign his book “The Bilingual Revolution“.

A native of France, Fabrice Jaumont moved to the United States in 1997. After serving as an education liaison for the French Consulate in Boston and then as assistant principal at the International School of Boston, he moved to New York in 2001. He is currently the Program Officer for FACE Foundation and the Education Attaché for the Embassy of France to the United States.
Fabrice Jaumont holds a Ph.D. in International Education from New York University. He is the author of Unequal Partners: American Foundations and Higher Education Development in Africa (Palgrave-MacMillan, 2016) which focuses on the role of philanthropy in education.

Book are available for sale ($20) both in French and in English at Alliance Française’s reception desk.