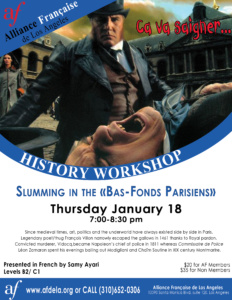 Since medieval times, art, politics and the underworld have always existed side by side in Paris. Legendary poet/thug François Villon narrowly escaped the gallows in 1461 thanks to Royal pardon. Convicted murderer, Vidocq, became Napoleon’s chief of police in 1811 whereas Commissaire de Police Léon Zamaron spent his evenings bailing out Modigliani and Chaïm Soutine in XIX century Montmartre.

The History Workshop : Passionate about history? You want to learn more about it while improving your French? Come and join Samy for this workshop about the Bas-Fond (slums) Parisiens.