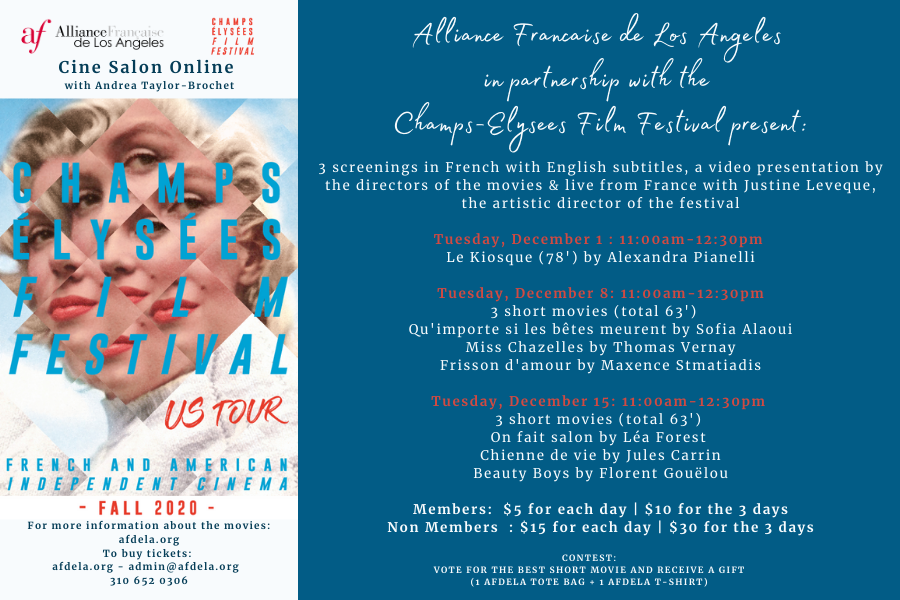 A selection of long and short movies.

Enjoy our best recommendations for French-language cinema, and join our new ciné-salon online event to discuss them in French (to the best of your ability), led by our instructors! Connect with others through our shared love of cinema and Francophone cultures while practicing your French!

Please find after information about each movie:

[SYNOPSIS] : Le Kiosque is a filmed diary of Alexandra, a young plastic artist who came to help her mother, a newspaper saleswoman in a fancy neighbourhood of Paris. From the job discovery to the bonding with the customers, the filmmaker plays the shopkeeper from an old child’s dream.
Behind the counter where members of her family succeeded one another for centuries, Alexandra enjoys recording the crowd with her phone. However the printed press is in crisis and this little game turned out to be more complicated than expected.

[BIOGRAPHIE DE LA RÉALISATRICE] : Alexandra Pianelli graduated from Strasbourg’s Decorative Arts School. She focuses on notions of work and game, loves DIY and gladly defines herself as a Swiss army knife. Her work expressed itself from the quest of the other. The one we don’t see even if we are just behind. She starts from a documentary approach in which reality joins fiction and strives, in the form of a game, to put in contact levels of reality that have been kept apart.
For several years, she has been directing films on her workplace (day jobs) where we see her doubly, “at work” and “in the act” of directing a film from a day job (or the other way around : choosing a day job in order to make a film) allowing her, as an artist, to not be divided between looking for a way to make a living and her creative time.

[SYNOPSIS] : High in the Atlas Mountains, the young shepherd Abdellah and his father are hemmed in by snow at their goat pen. Their animals are wasting away. Abdellah must go to find supplies at a market village more than a day’s walk away. When he arrives with his mule, he finds the village abandoned due to a strange event that has wreaked havoc on the lives of all believers.

[BIOGRAPHIE DE LA RÉALISATRICE]: Sofia Alaoui, born in Casablanca, Sofia Alaoui spent her childhood between Morocco and China. She has directed both documentary and fiction shorts broadcasted on French television channels (France 3, TV5, OCS).
Her latest documentary LES VAGUES OU RIEN was successfully released in Morocco and her last short fiction SO WHAT IF THE GOATS DIE, shot in Morocco, won the Grand Jury Prize at Sundance 2020. Sofia is aiming for a cinema beyond borders that flirts with cinematographic genres. She is currently developing her first feature and TV series produced by Barney Production.

[SYNOPSIS] : Clara and Marie are rivals. Clara is the first runner-up while Marie won the famous Miss Chazelles-sur-Lyon title. As tension grows between Clara’s friends and Marie’s family in the village, both girls seem to develop an ambiguous relationship.

[BIOGRAPHIE DU RÉALISATEUR] : After a Higher diploma in applied arts, Thomas Vernay directs his first short film Dryad, a fantasy tale inspired by pictural art and the connection between sound and image. The film was selected in competition at STIGES International Fantastic Film Festival in 2016 and programmed in over 70 festivals where he received a dozen of prizes. After directing many award winning videos, he directed his second short film Miss Chazelles, a drama shot in his childhood village. The film questions social and sentimental determinism.

[SYNOPSIS] : Suzanne is haunted by the disappearance of her husband Édouard. She talks to him and is overwhelmed by his pictures all over her apartment until a doppelganger interferes between her and the ghost.

[BIOGRAPHIE DU RÉALISATEUR] : Franco-Greek filmmaker, born in France in 1988, Maxence Stamatiadis graduated from The École nationale supérieure des Arts Décoratifs in 2012. His work between fiction, documentary and contemporary art has been exposed and rewarded in various festivals (Locarno, FIFIB, Clermont Ferrand…), at La Cinémathèque de Paris as well as in other forms of art installations (Galerie Occidentale, Salon de Montrouge).

[SYNOPSIS] : In a small barber shop, 8 young boys between 12 and 18 years old are having their hair cut. Their experiences, origins and social backgrounds diverge. As the barbers meticulously shape their heads, the adolescents share their thoughts about their relationship to the world.

[SYNOPSIS] : In a forgotten countryside of France, two eternal teenagers spend their time drinking beers. Ten years older Lamiche torments Yannick and leads him to many monkey business. Their friendship gets bogged down and Lamiche finds himself alone, on the edge of the world.

[BIOGRAPHIE DU RÉALISATEUR] : After a bachelor degree in literature, Jules spent many years on film sets. In 2017, he graduated from filmmaking at Geneva’s HEAD. His two short films Premier amour and Chienne de vie were screened in many festivals (Berlinale, VIS, Filmfest Hamburg, San Sebastian…). He is currently directing his new short Les Rives du Styx.

[SYNOPSIS] : Leo and his friends are seventeen. They live in a small village where they share a common passion for makeup. His older brother Jules is afraid to be the laughing stock of his own friends. One night, at the village’s open mic, Leo shows up on stage dressed as a drag queen, against his brother’s advice.

[BIOGRAPHIE DU RÉALISATEUR] : Florent Gouelou is an actor and director. In 2017 he graduated from the Directing Department of la Fémis and directed “Un homme mon fils” which premiered at Clermont-Ferrand in 2018 and won the Interpretation Prize. He is currently developing his first feature.

WHERE TO WATCH / HOW DOES IT WORK?