AILS – Alterity in question: The Universe as Other

Alterity in Question: “The Universe as Other: How Science Has Constructed a View of Reality Radically Divergent from Our Experience” 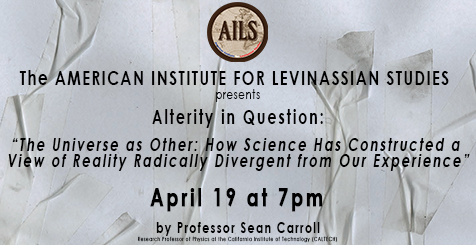 The more we understand about the universe, the more alien it seems. Modern cosmology has revealed a universe much larger than the world of our experience, dominated by things like “dark matter” and “dark energy” that are very different from the stuff of which we are made. Meanwhile, physics has introduced the mysteries of quantum mechanics, according to which reality is made of very different things than the conventional picture of objects with positions and velocities. I will describe some of these findings, discuss how many people have been resistant to accepting such a counter-intuitive picture of the world, and suggest that perhaps this is simply what we should have expected all along.

By Professor Sean Carroll, Research Professor of Physics at the California Institute of Technology (CALTECH)

Sean Carroll is a physicist and author. He received his Ph.D. from Harvard in 1993, and is now Research Professor of Physics at the California Institute of Technology, where his research focuses on fundamental physics and cosmology. Recently, Carroll has worked on the foundations of quantum mechanics and statistical mechanics, the emergence of spacetime, and the evolution of complexity. He has been awarded prizes and fellowships by the Guggenheim Foundation, National Science Foundation, NASA, the Sloan Foundation, the Packard Foundation, the American Physical Society, the American Institute of Physics, and the Royal Society of London. Carroll’s most recent book is The Big Picture: On the Origins of Life, Meaning, and the Universe Itself. Previous works include popular books The Particle at the End of the Universe and From Eternity to Here, the graduate textbook Spacetime and Geometry, and three lecture courses for The Great Courses. He has written for The New York Times, Scientific American, Nature, The Wall Street Journal, and other publications.