The Language of Levinas : To be or not to be 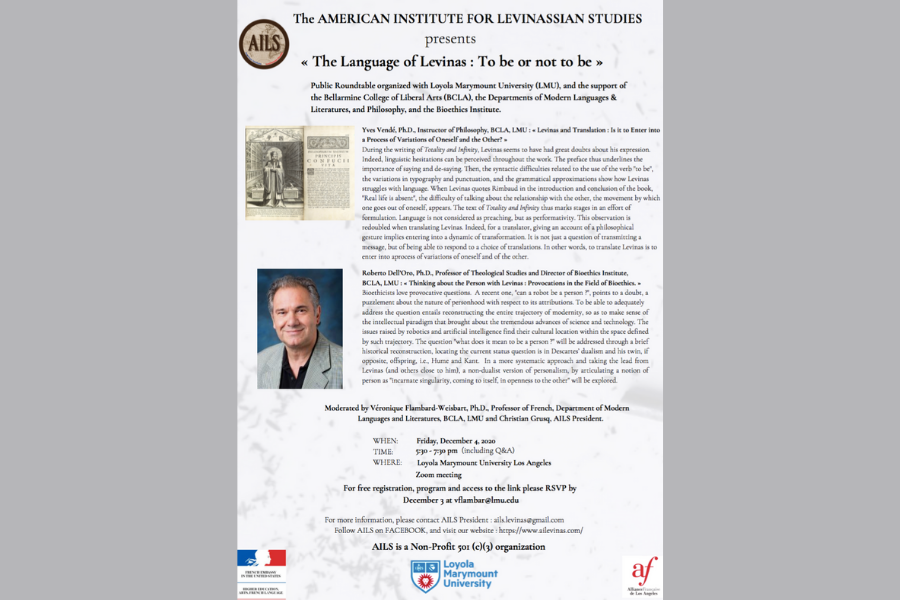 For free registration, program and access to the link please RSVP by December 3 at vflambar@lmu.edu

Public Roundtable organized with Loyola Marymount University (LMU), and the support of
the Bellarmine College of Liberal Arts (BCLA), the Departments of Modern Languages &
Literatures, and Philosophy, and the Bioethics Institute.

Yves Vendé, Ph.D., Instructor of Philosophy, BCLA, LMU : « Levinas and Translation : Is it to Enter into a Process of Variations of Oneself and the Other? »
During the writing of Totality and Infinity, Levinas seems to have had great doubts about his expression. Indeed, linguistic hesitations can be perceived throughout the work. The preface thus underlines the
importance of saying and de-saying. Then, the syntactic difficulties related to the use of the verb “to be”, the variations in typography and punctuation, and the grammatical approximations show how Levinas
struggles with language. When Levinas quotes Rimbaud in the introduction and conclusion of the book, “Real life is absent”, the difficulty of talking about the relationship with the other, the movement by which
one goes out of oneself, appears. The text of Totality and Infinity thus marks stages in an effort of formulation. Language is not considered as preaching, but as performativity. This observation is redoubled when translating Levinas. Indeed, for a translator, giving an account of a philosophical gesture implies entering into a dynamic of transformation. It is not just a question of transmitting a message, but of being able to respond to a choice of translations. In other words, to translate Levinas is to enter into aprocess of variations of oneself and of the other.

Roberto Dell’Oro, Ph.D., Professor of Theological Studies and Director of Bioethics Institute,
BCLA, LMU : « Thinking about the Person with Levinas : Provocations in the Field of Bioethics. »
Bioethicists love provocative questions. A recent one, “can a robot be a person ?”, points to a doubt, a puzzlement about the nature of personhood with respect to its attributions. To be able to adequately
address the question entails reconstructing the entire trajectory of modernity, so as to make sense of the intellectual paradigm that brought about the tremendous advances of science and technology. The issues raised by robotics and artificial intelligence find their cultural location within the space defined by such trajectory. The question “what does it mean to be a person ?” will be addressed through a brief
historical reconstruction, locating the current status question is in Descartes’ dualism and his twin, if opposite, offspring, i.e., Hume and Kant. In a more systematic approach and taking the lead from
Levinas (and others close to him), a non-dualist version of personalism, by articulating a notion of person as “incarnate singularity, coming to itself, in openness to the other” will be explored.

For free registration, program and access to the link please RSVP by December 3 at vflambar@lmu.edu