Demystifying the French: A Panel Discussion 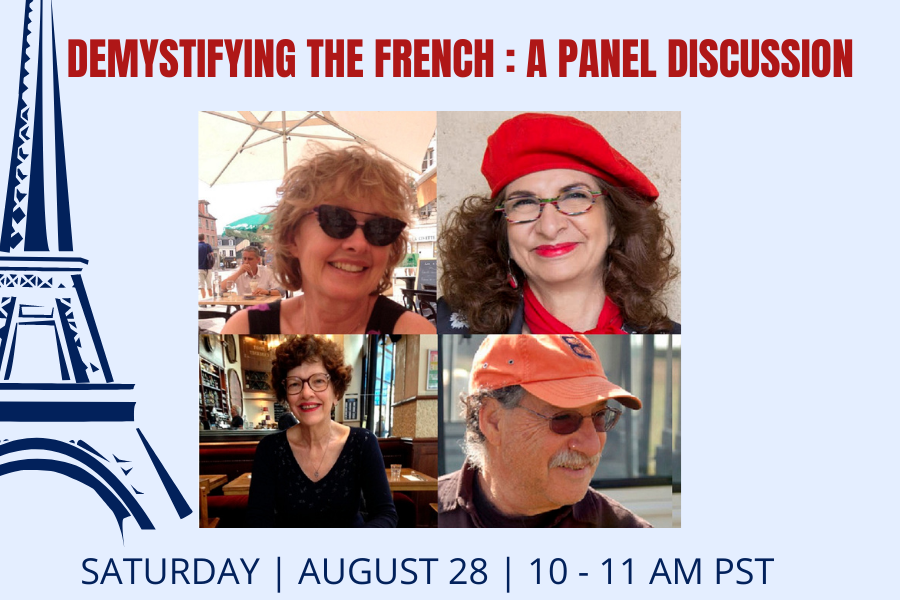 We’ve all encountered clichés about the French. We may have heard that the French can be rude and arrogant, and even perhaps that the French may secretly harbor a dislike for Americans. My goodness – ma foi – could these clichés have some truth in them? Or could there, perhaps, be some kind of culturally based misunderstanding going on? Our panel of experts will share their insights, perspectives, and experiences, gathered over the course of many years of living, traveling, and/or working in France, and will take questions from the audience about how to understand, appreciate, and best deal with the sometimes bewildering, often admirable, nearly always fascinating ways of the French!

Mark Greenside was born and raised in New York, and now lives in northern California. In 1991 he was dragged to a little village in Brittany by a girlfriend to spend the summer. He and the girlfriend fell out of love with each other, but he fell in love with the village, and to his astonishment ended up buying a home there, a rollicking adventure he recounts in I’ll Never Be French (no matter what I do), described by the San Francisco Chronicle as a “fun and high-spirited read, and proof that one is never too old to find true happiness in life.” In his latest, and equally entertaining (and helpful) book, he tells the continuing story of how he is (not quite) Mastering the Art of French Living.

Janet Hulstrand grew up in Minnesota, has lived in New York and Washington D.C., and has spent as much time as she can in France since her first trip there in 1978. Since 1997 she has taught “Paris: A Literary Adventure” for City University of New York study abroad programs; she also teaches literature and culture classes focusing on France for Politics & Prose bookstore. She writes for Bonjour Paris, France Today, and France Revisited, and is the author of Demystifying the French: How to Love Them, and Make Them Love You, which Jake Lamar called “a  witty, wise, and keenly observed cultural handbook.” She lives in the lovely little village of Essoyes, in the Champagne region, where she is working on her next book: A Long Way from Iowa: A Literary Memoir.

Adrian Leeds was born and raised in New Orleans. In 1994, she moved to Paris with her family for a one-year “sabbatical” and never left. Her company, the Adrian Leeds Group, provides a full range of property and consultation services for North Americans–– “French Property the American Way.” She is fully committed to helping people realize their dream life in France, and has helped many hundreds of Francophiles to do just that. She is most well-known as the network’s most popular real estate agent on the HGTV series House Hunters International. Since 2001 she has published Nouvellettres® (newsletters) three times a week that are a source of a great deal of practical information about living in France, as well as lively stories about her day-to-day experiences in Paris, Nice and beyond.

Harriet Welty Rochefort grew up in Iowa, bought a one-way ticket to France after graduating from college, and once she got there, never left. She is the author of three nonfiction books about the French: French Toast, French Fried, and Joie de Vivre, all published by St. Martin’s Press. Diane Johnson, author of Le Divorce, called  French Toast the “gold standard” of books about the French, and the Los Angeles Times called it “wise and devastatingly funny.” Harriet’s latest book, published in 2020, is Final Transgression, a novel set in France during World War II, based on a true story from her husband’s family. A bi-national, Harriet lives with her husband, Philippe, in Paris. They divide their time between their garden apartment there and their second home in Brittany.