An Enchanting Journey Down the Seine with Elaine Sciolino Online 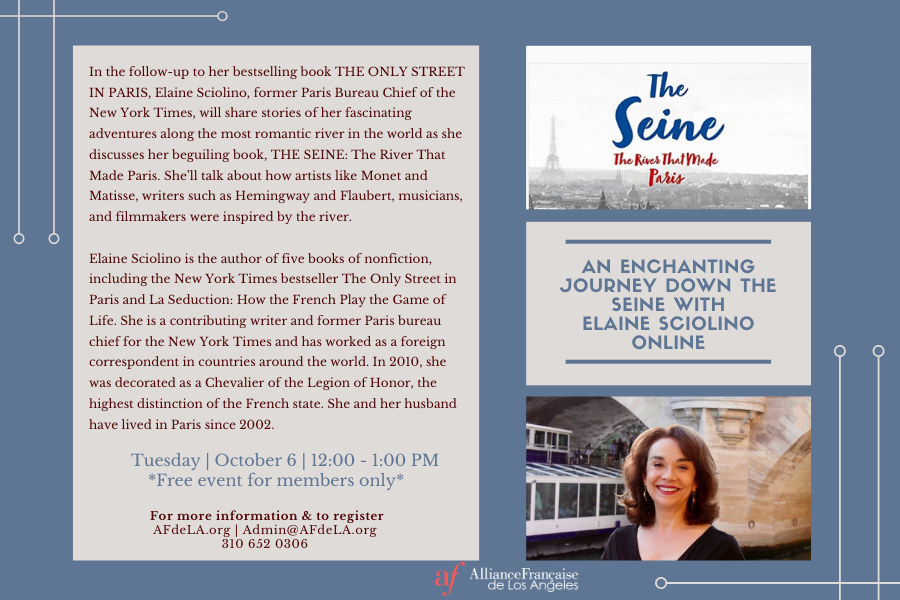 In the follow-up to her bestselling book THE ONLY STREET IN PARIS, Elaine Sciolino, former Paris Bureau Chief of the New York Times, will share stories of her fascinating adventures along the most romantic river in the world as she discusses her beguiling book, THE SEINE: The River That Made Paris. She’ll talk about how artists like Monet and Matisse, writers such as Hemingway and Flaubert, musicians, and filmmakers were inspired by the river. She’ll regale us with tales of the wonderful real life characters she met on her journey down the Seine as she charts a course through history, recounting how the river has carried Roman conquerors, Viking invaders, World War II soldiers, and the ashes of Joan of Arc and of Napoléon Bonaparte in its current.

Following this great body of water from its source in Burgundy to where it meets the sea in Le Havre, Sciolino deftly captures the natural ambience as she explores a champagne vineyard, joins the river police on patrol, and rows with an antique boat-restorer. Along the way, she reveals how the river that created Paris and shaped the lives of its inhabitants has touched her own life.

Elaine Sciolino is the author of five books of nonfiction, including the New York Times bestseller The Only Street in Paris and La Seduction: How the French Play the Game of Life. She is a contributing writer and former Paris bureau chief for the New York Times and has worked as a foreign correspondent in countries around the world. In 2010, she was decorated as a Chevalier of the Legion of Honor, the highest distinction of the French state. She and her husband have lived in Paris since 2002.

This event is part of an international launch her new book, THE SEINE: The River That Made Paris. Participants are encouraged to pre-order the book at any of these links: Amazon | Barnes & Noble | Bookshop | IndieBound

Get a taste of her book here.