AILS – Alterity in Question: “Portraits of the Other from the New World in Montaigne’s Time” 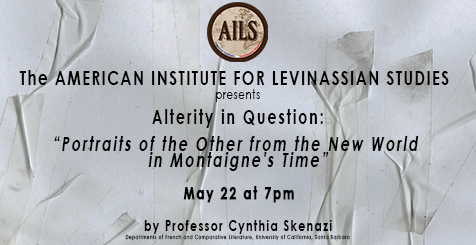 About a century after Columbus landed in an island of the Americas, Montaigne reconsidered various aspects of the encounter with the Other by commenting on travel narratives reporting on such experiences. Like many contemporaries writing about the implications of these events, he had a specific political and religious agenda in mind, yet his views on alterity in the Essays provide insightful perspectives on a crucial problem of our time.

She was the Guest Editor of a double special issue on “Le Voyage en Europe à la Renaissance”, Romanic Review 94, 1-2, 2003, and is currently preparing a special issue of French Forum on “Alterity in the Renaissance” co-edited with Colette H Winn.in a variety of universities and public institutions, including the World Bank, InterAmerican Development Bank, the White House Council of Economic Advisors, the United States Trade Representative, Stanford University, and the University of California Berkeley. Professor Hinojosa founded the North American Integration and Development (NAID) Center at UCLA in 1995, dedicated to developing innovative research agendas and policy pilot projects concerning globalization and development.

PRESENTED IN ENGLISH WITH Q&A AND COCKTAIL RECEPTION

Please RSVP BY MAY 18 : ADMIN@AFDELA.ORG